What Kind of Baptist was Fosdick? 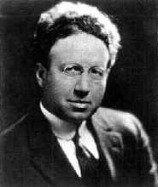 I was reading a message preached by Dr. T. T. Shields (1873-1955) January 16, 1944 at Jarvis Street Baptist Church titled Does “Killed in Action” Mean “Gone to Heaven?” In it he deals with differring denominations and that in all of them there are those who are in need of being saved. He had a comment regarding Harry Emerson Fosdick (1878-1969) which made me chuckle.

“What about Baptists? Surely that are all right! They ought to be, but I have met hundreds of Baptists who were just as dry as my Presbyterian friend, though they had been immersed! Harry Emerson Fosdick is a Baptist of sorts.”

According to Shields, Fosdick was a Baptist in name only. He did not possess true saving faith necessary to make him a true Baptist.

This entry was posted on Thursday, April 26th, 2007 at 12:22 am and is filed under Harry Emerson Fosdick, T. T. Shields. You can follow any responses to this entry through the RSS 2.0 feed. You can leave a response, or trackback from your own site.

One Response to What Kind of Baptist was Fosdick?