Spirituality is a rather popular subject in modern evangelicalism. But with so many competing visions of what biblical spirituality is, how will we know what it looks like? This is where Joel Beeke and Michael Haykin come in. They remind us that so much of spirituality can be taught to us by looking at the lives of those who have lived it before us! Thus comes the series, Profiles in Reformed Spirituality. This is fast becoming one of my favourite series of books being written. And this is not because Michael Haykin is my boss! But, both of the series editors acknowledge that evangelicalism is in desperate need to have a more clearer view of biblical spirituality and thus the lives and writings of individuals who have gone before us can be studied with profit as we grow in our own spirituality. So far three books are available now with more to come. These are: 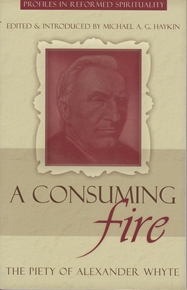 A Consuming Fire: The Piety of Alexander Whyte

“Michael A. G. Haykin provides an excellent primer on Reformed Evangelical spirituality by opening a window to the life and work of Alexander Whyte. Haykin’s biographical essay introduces the reader to Whyte and to the high premium he placed on vibrant Christianity. The remainder of the book presents 28 selections from various written works by Whyte that display his burning zeal for the devoted life. For those who are not familiar with Whyte but interested in acquainting themselves with him and the spirituality of the Reformed tradition, this book will make a reliable introduction.”

A Sweet Flame: Piety in the Letters of Jonathan Edwards

“‘A Sweet Flame’ introduces readers to the piety of Jonathan Edwards (1703-1758). Dr. Haykin’s biographical sketch of Edwards captures the importance the New England minister placed on Scripture, family piety, and the church’s reliance upon God. The remainder of the book presents 26 selections from various letters written by Edwards, two written by family members at his death, and an appendix drawing upon Edwards’s last will and the inventor of his estate.”

Devoted to the Service of the Temple: Piety, Persecution, and Ministry in the Writings of Hercules Collins

This newest of the books is co-edited by my boss and my good friend Steve Weaver a lover of Hercules Collins. Having proof-read the book I am very anxious to see it finally in my hands! It was wonderful to delve into the immense piety of a grand 17th century Baptist pastor. Anyone and everyone should grab this book immediately and read it as if their lives depended on it!

“Hercules Collins is one of the great figures from our Bapitst heritage – a heritage who suffered much for the cause of Christ and left a great legacy for generations that followed. There is something especially compelling about the witness of a man who was oppressed and imprisoned for his faith in our Lord Jesus Christ. The witness of Hercules Collins as pastor, prisoner, and preacher is worthy of the closest attention in our own times. We are indebted to Michael Haykin and Steve Weaver for bringing Hercules Collins to life for a new generation.” R. Albert Mohler, Jr. (President, The Southern Baptist Theological Seminary).

Go out and get these books and read them today! They will bring you closer in your walk with the Lord than much of contemporary devotional material. You will learn from giants of the faith from the past who will help to conform your own spirituality into the image of the Lord Jesus!

This entry was posted on Thursday, August 16th, 2007 at 2:13 pm and is filed under Spirituality. You can follow any responses to this entry through the RSS 2.0 feed. You can leave a response, or trackback from your own site.

2 Responses to Profiles in Reformed Spirituality