New Series: Advice from The Doctor 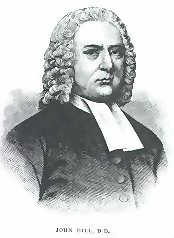 As I have made the switch from formal study of Andrew Fuller to that of John Gill (my lover for Fuller though continues to grow!) I should switch from my quotes of Fuller I used to do to that of John Gill. So, now every Friday I will contribute something of Gill’s from my new series called Advice from The Doctor as Gill has been called The Doctor before. As probably the most important theologian of the Particular Baptist community, it is important to continue to learn and to grow from this great saint. Today’s quote comes from a sermon Gill preached on November 2, 1750 at the baptism of several persons in Barbican titled, “The Scriptures: The Only Guide in Matters of Faith.”

“About the way of Salvation; if that is the affair the doubt is concerning, look up to the way-posts, look into the word of God, and read what that says; search the scriptures, for therein is the way of eternal life; life and immortality, or the way to an immortal life, is brought to light by the gospel. The scriptures, under a divine influence, and with a divine blessing, are able to make a man wise unto salvation, and they do point unto men the way of it: it is not the light of nature, nor the law of Moses, but the gospel-part of the scriptures which direct to this; there will shew you, that God saves and calls men with an holy calling, not according to their works, but according to his purpose and grace; that it is not by works of righteousness done by men, but according to the mercy of God, that men are saved; and that it is not by works, but by grace, lest men should boast (2 Tim. 1:9; Titus 3:5: Eph. 2:8,9). That it is a vain thing for men to expect salvation this way; that it is a dangerous one: such who encompass themselves with sparks of their own kindling shall lie down in sorrow: and that it is a very wicked thing; such sacrifice to their own net, and burn incense to their own drag. These will inform you that Christ is the way, the truth, and the life; that he is the only true way to eternal life; that there is salvation in him, and in no other: the language of them is, Believe on the Lord Jesus Christ, and thou shalt be saved: these words, Salvation alone by Christ, salvation alone by Christ, are written as with a sunbeam on them; just as the way-posts, set up in places where two or more ways met, to direct the manslayer when he was fleeing to one of the cities of refuge from the avenger of blood, had written on them in very legible characters, refuge, refuge.”

This entry was posted on Friday, June 6th, 2008 at 3:13 pm and is filed under John Gill. You can follow any responses to this entry through the RSS 2.0 feed. You can leave a response, or trackback from your own site.